About Speech and Debate

The Norton High School Speech and Debate Team is affiliated with The Ohio High School Speech League and the National Forensic League.  Students attend interscholastic tournaments at local and regional high schools and compete in speaking events that range from poetry reading to traditional debate.  Students at Norton have the opportunity to compete in 11 different speech and debate events.

The Speech and Debate Team is sometimes referred to as the Forensics Team.  The word forensics means "the art or study of argumentation and formal debate." Forensic comes from Latin, and it means "of the forum." When people refer to the Forensics Team, they are talking about the highly motivated group of NHS Students on the Speech and Debate Team.  Students compete in the events described below.

Membership in the National Speech and Debate Association 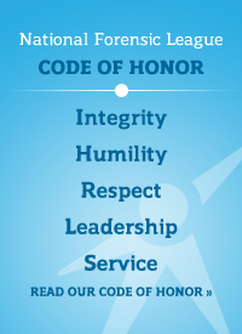 The National Speech and Debate Association is the national honor society for secondary speech and debate. The League works to spark transformation in the lives of students, to help them become effective communicators, critical thinkers and engaged, ethical members of our democratic society. The NFL membership boasts over 120,000 high school and middle school students, representing nearly 3,000 schools nationwide. Over our 85 years of history, we’ve seen over 1.4 million teens transformed into vibrant, engaged young adults.

When Norton students compete at interscholastic speech and debate tournaments, they earn points toward membership into the NSDA.